For this challenge we’re provided the binary and a libc.so.6 binary. Just by being provided this second binary we are hinted that we will need some fuctionality from it: Rop or ret2libc probably.

I’ve recently bought the personal edition of Binary Ninja, and so will be using it for most of my static analysis.

Popping it into binja we (happily) see that it’s a rather small binary. main is rather simple, with a menu system and a large loop, and what looks like no exit. 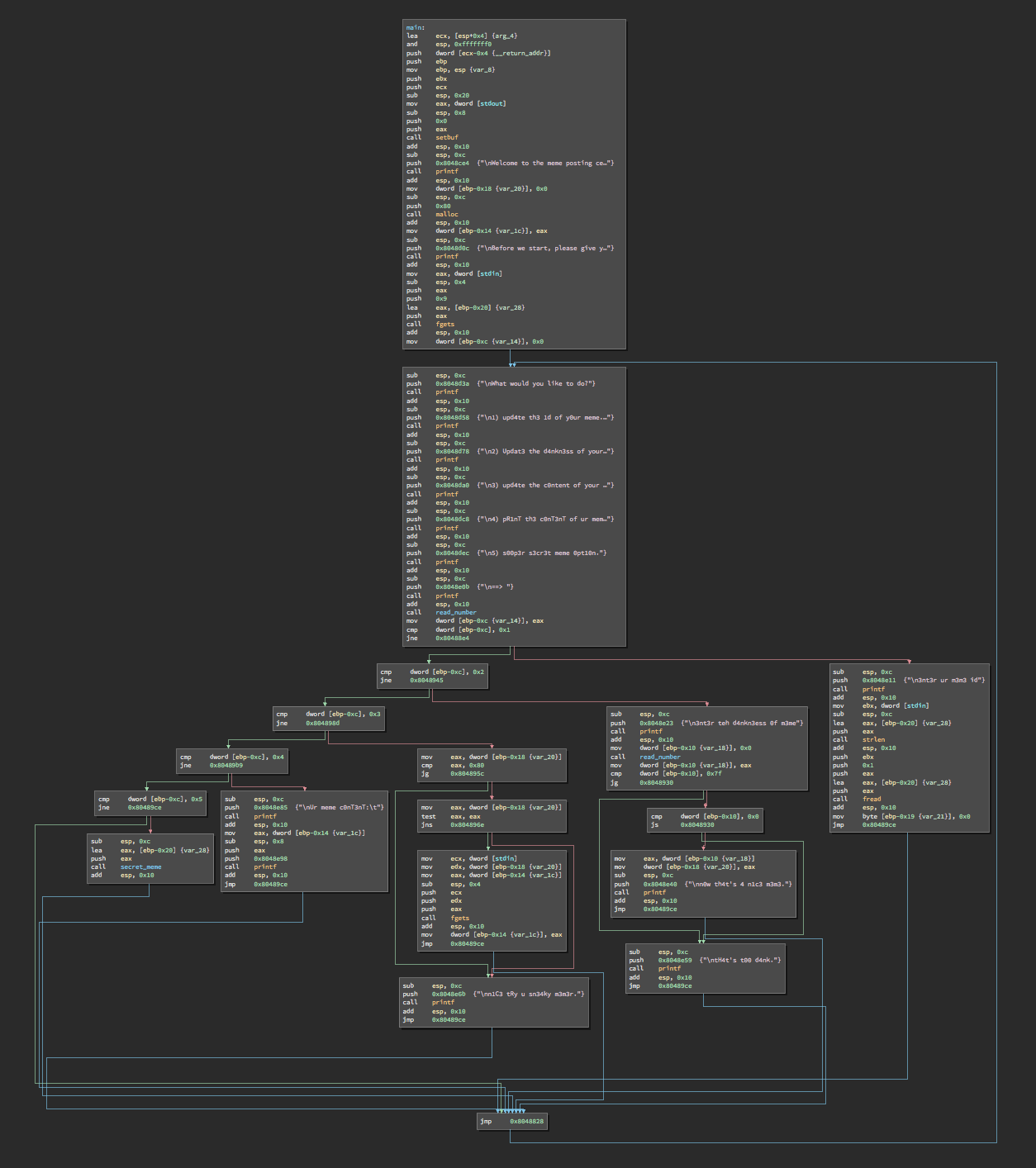 Next the menu is printed:

Reversing item by item we see the following:

With these functions figured out, this is what main’s stack frame looked like:

While using secret_meme might look like a good way to get a huge write into the heap buffer, that is not actually where the vulnerability lies. The size is checked that it’s in range, anyway. Instead, this function helps us because it can wipe out ID’s null byte: Provided an eight-byte ID the null byte will lie over the first byte of size. By overwriting this we can change our ID, and the strlen call will not return 8 (or less) but instead 8 + sizeof(size) + sizefof(buf_ptr), and will keep going until it finds a null byte. What is important, though, is that this will allow us to overwrite buf_ptr, and then we can use menu option 3 to write at this selected address.

To write to this address, though, I needed to pass the size check, but secret_meme had placed an invalid value, and anyway I had overwritten it again on my way to overwriting buf_size. I could have used the second menu item to reset the size, but I instead just made sure to write a valid size when I was overwriting these bytes.

With a write-what-where primitive I can pretty much do what I want, but I don’t know the address of the stack, so I will have to attack the global offset table. Here I made it more difficult than I needed, but bear with me.

I know that I needed to leak the address of something in libc, so that I could calculated the offset from there to system, and then patch that address into some import’s entry in the GOT. My idea was to replace atoi@got, which is used in the menu, with the address of printf@plt. This would allow me to provide format strings to the menu system to leak addresses on the stack. An added benefit is that I could still use the menu, because printf returns the number of bytes printed, so to select item 3, for example, it’d just have to pass a string that prints three bytes.

One interesting thing I noticed about Binary Ninja is that they seem to name some of their symbols incorrectly. When finding the address of atoi@got, I got myself pretty confused. What binja labels as atoi is actually atoi@plt. What they label as atoi@plt is atoi@got.plt.

According to Binary Ninja

Inspecting the stack I could see that __libc_start_main+243 is on the stack, and would be the 23rd element printed. This means that provided the string “%23$X” would print out that address. 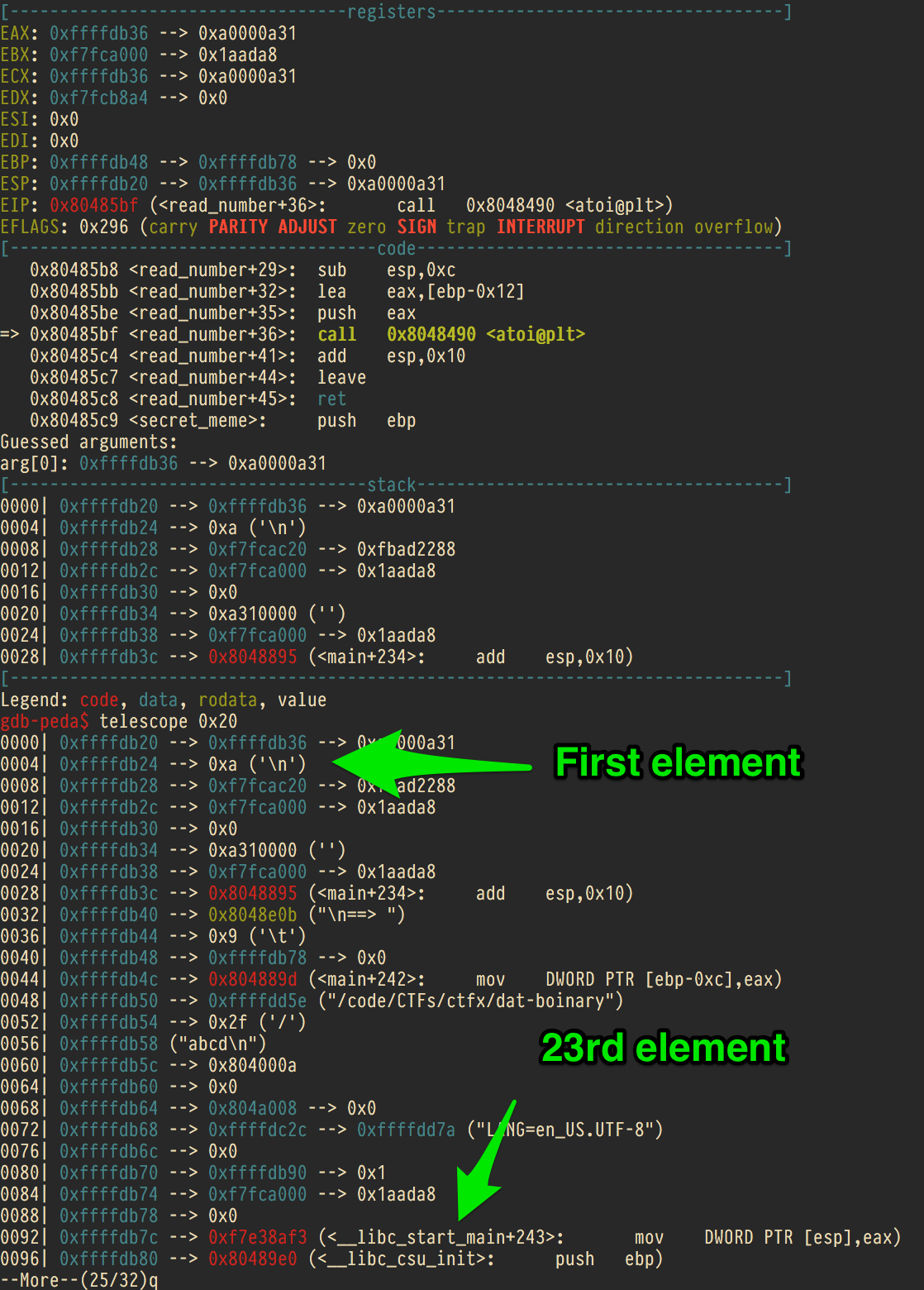 With the address of system on hand, I had to write to the atoi@got entry again, replacing printf@plt with system. This was done simply by passing a string of length three bytes (including the newline) to printf to select menu item 3.

Finally, with the pointer in place, I simply needed to enter shell command I wanted into the menu system.

Now while this worked fine, I noticed later that I had made it more complicated than I needed to: Menu item 4 would print out the value at buf_addr, and when I filled it with the address of atoi@got, that value woudl be the address of atoi (since it had already been called and so already resolved). This would get me my libc address leak without needing a format string.

Either way, I had a working exploit: