This challenge provided task.bin an ELF.

Popping it into IDA and manually selecting “Atmel AVR” as the CPU I was happy to see demangled C++ function names as well as global symbols. Looking at the globals there were a few of note: i, int_recorded, buttonState, and Serial. OK, this clearly expects input from the GPIOs and/or over serial.

Looking at the functions, there were a few to reinforce my hypothesis: HardwareSerial::read for one. Although I didn’t see anything that showed GPIOs being read, this wasn’t too big of a deal: GPIOs are easily read just by reading from a certain register. There were a few that made me a little bit nervous: TIMER0_OVF specifically. If I had to deal with precise timing I would not have fun. The timers, however, are probably used to keep the serial clock.

Without a main function I started my analysis at __RESET. Thanks to the labels I was able to easily skip most of the function, which was just clearing our the .bss segments. Looking at where the ‘function’ ‘ended’, I found a jump to, basically, an infinite loop, and just before it a call to sub_2D4. This is main.

I started in main but was quickly overwhelmed with what was going on. I am not familiar with the instruction set, and since a lot of it is configuration, I would have to constantly refer to the datasheet. I needed something faster. 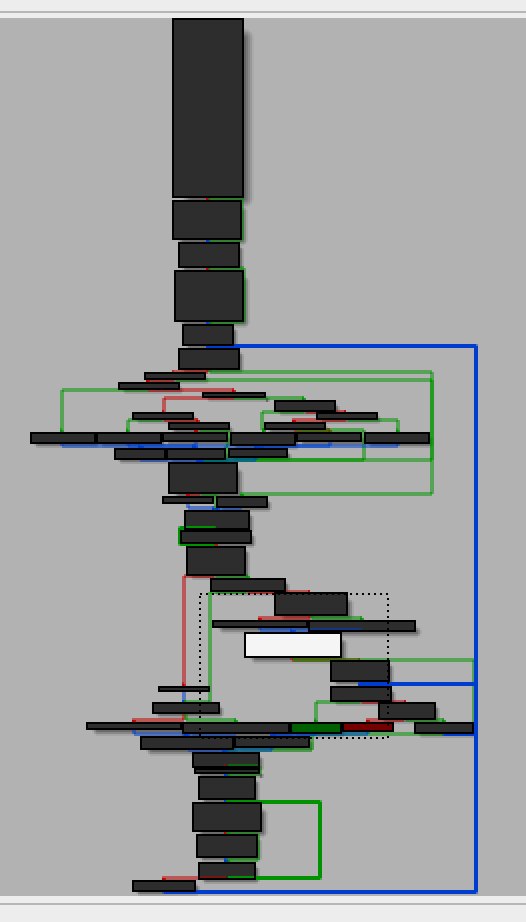 Now the AVR is a series of microcontrollers that is ubiquitous in electronics. Your TV’s remote might have one (though it’s likely a PIC). They exploded in popularity, however, with the introduction of the Arduino. I had a hunch that this was an Arduino binary, so I decided to see what an arduino binary looks like in IDA.

I wrote up a simple ‘sketch’ that setup serial communication, sent and received a few bytes, and read input from a few GPIOs. My goal was to get the same set of functions and a similar setup to my mystery binary – This would let me find the common code and basically ignore it completely.

After figuring out where the damned ELF is written to when compiled (some temp folder), I popped it in IDA and was happy to see that the code was indeed very similar. micros, for example, was a function I thought I might have to reverse, but it turned out it was just the delay function. All I really needed to look at was main, and I could ignore most of the first basic block, as it was just serial setup.

Since I figured the binary would send something out on the serial line I looked at the strings and found three that mattered: “ recorded”, “Wrong flag”, and “Right flag”. Easy! Just find the Xrefs and trace back to find how to reach either!

This is where I hit another snag: No Xrefs. Come to think of it, I couldn’t find an xref to any of the globals I found. There was a reason for this. Two actually:

Armed with this knowledge I was able to find the xrefs. I just had to look for code that wrote two immediates into two registers that, when appended to eachother, formed the 16-bit address I was looking for. Skimming through the code I quickly found what I was looking for: The branch to “Right flag” at 0x42A.

Despite knowing where I needed to get to, I had a very hard time figuring out where the input was read: It was time to go dynamic.

Simavr is a great little AVR emulator and I could not have solved this challenge without it. While there’s a CLI to run hex files, what I wanted (gpio and serial) was a little bit more involved. Luckily there were examples that did what I needed. Guessing that the AVR was an atmega328 (an AVR used commonly in the Arduino) it was little trouble combining the examples and adding a few tweaks to get it running. Using cu to connect to the tty that simavr created I could see the output:

I tried to send text over serial but it appeared to be non responsive. I ended up writing code to randomly press GPIOs, but I don’t think it worked at all, what I needed was a debugger. Luckily this is another thing that simavr supports! My simulation code can be found here.

Installing avr-gdb (with brew) and setting up simavr to setup a gdb server I could connect. Only issue was that breakpoints didn’t work! After some struggling I found two peculiarities:

This meant that if I wanted to set up a breakpoint in GDB I had to:

Now it was a matter of forcing the code path to go towards the prints I wanted. I set up breakpoints at the conditional branches at 0x3F4, 0x3F8, 0x41C, and 0x431. At each point I simply set the appropriate register or status flag to take the branch I wanted. The branch at 0x431 is hit in a loop, each time after doing a series of comparisons. If any fail the badboy message is printed. These checks are what I need to pass. The check before that, at 0x41C, checks that some variable is 10. Since the flag format for this challenge was 10 numbers, this is clearly a check that enough have been reported.

I got around these by faking the number of report values to 10 at the 0x41C check. The badboy check I got around by setting up a command on the breakpoint to automatically dump the registers (info reg or i r), set the zero flag in the status register to pass the check (set $SREG = 0x37 has this bit set and didn’t mess with the others), and then continuing. I then looked at the values in r18 and r19, that were printed out, appended them (print r19<<8 + r18), and submitted.